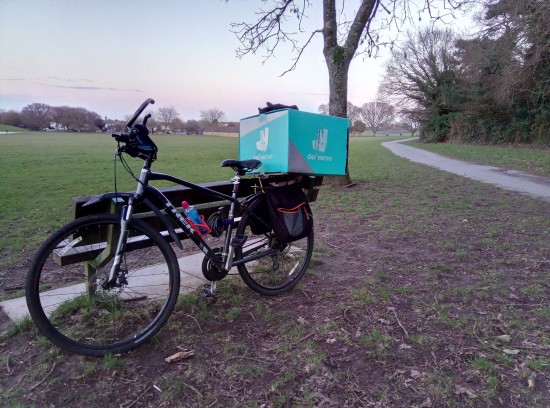 Hey, remember that guy I told you about who is cycling from the Orkney Islands to Bournemouth, all in the name of charity?

Well, you should do, because I only posted it out recently. I mean, come on people…keep up!

His name is Jonathan and he has a beard; a really REALLY cool beard; one which seems to be getting longer by the day.

He also has an update for all of you which I am really proud to share with you. If you’ve not done so already then please do sign up for his blog posts because his (almost) daily emails, photos, and videos are absolutely brilliant and also hilarious at times. I’ve been looking forward to each and every one of them dropping into my inbox.

He’s having a real adventure and while I’ve no doubt that it’s really tough going, the places he’s been, the things he’s seen, and the people he’s met have really got my feet itching. One thing that has really stood out has been the stories that include the kindness of strangers and the people he’s met along the way; it’s really been quite uplifting.

Finally, as I write this Jonathan has achieved 80% of his donation target so please feel free to help him creep up towards 100% by following this link to his Virgin Money Giving page.

Hi Elliot! I’ve an update for you on my Orkney To Bournemouth charity ride. I’m currently on the ferry back to Scrabster, on the Scottish mainland and while I’ve had a mixed bag of weather, I’ve enjoyed everything about my time on Orkney.

I arrived late on the 4th, so after a little ride towards the capital, the falling light led me to find a place to camp. On a heathery hillside, I spied a tumbledown cottage; it had no roof, missing most of its walls and was surrounded by slugs-an ideal spot!

I used my mini stove for breakfast and coffee in the morning, before heading off in the sunshine. It was a hot ride to Highland Park Distillery, so I was glad to get in the shade, and pick up the famed whisky! Just a brief stop, then onwards to the North.

The sunshine continued, tempered by wind, as I headed to an Iron Age fort and village, The Broch of Gurness. Crosswinds all the way made riding tricky at times, but also made arriving all the more rewarding. The steward of the fort was very interesting, throwing light on what is known and what isn’t!

I was about as far North as I could go on a bike, so headed West to the Earl’s Palace at Birsay. This was a hard going few miles, as the crosswinds were always partially against me, except when they turned into headwinds, and were totally against me! The palace was ruined, but still worth seeing. The Earl that had it built had a reputation for being cruel and oppressive, but ended up jailed for treason. Nice bit of karma!

The heavy winds had picked up, so I rose to a hostel campsite for the night, as the only sheltered area around. Poor discipline on drinking and eating had left me with a sore head too, so it was good to find somewhere easy.

The sore head meant I left Birsay hostel late the following day. Still, I had places to go to – Skara Brae was my next stop!

It’s fascinating there. There’s a visitor centre (with café) full of interactive displays, and finds of course, then you head outside along a time-trail. After that, you have the village itself, with an expert there to answer any questions on the World Heritage site.

It’s amazing to think that people were living there 5000 years ago, and one of the possible causes of the village’s abandonment, is the very same thing that saved it for us to see, all these years later.

While at Skara Brae, you also get to visit Skaill house, that belonged to the local laird who’s land Skara was on. It’s a nice insight into the centuries of occupation that continued in the area, even after the climactic changes in bygone times.

Leaving there, I headed South East to the Ring of Brodgar, the Ness of Brodgar and the Standing Stones of Stenness. The Ness is a famous archaeological site that is only worked in the summer months; due to Orkney’s turbulent weather, all I got to see were tires covering sheets of plastic!

Luckily the other sites were sufficiently imposing to make up for it.

Now I’ll have to break here; the purser has just come to take me up to the bridge to meet the Captain and crew!

This update is now a few days old and he’s actually much further into his journey. The last I heard he’d reached Penrith and has covered 621 miles so far; that’s over a third of the anticipated total distance. Come on Jonathan!

I’m hoping to have more news for you soon. Thank you for reading and please do help get the word out by sharing this post.